Thank you for your patience while we retrieve your images.

Created 17-Jan-12
24 photos
Ensign Jones died during WWII while attempting to land a "Flyable Dud" (a worn or damaged aircraft) from the USS Essex on the USS Admiralty Islands. He was not responding well to signals from the LSO (Landing Signals Officer) and received a late "Wave Off". While applying full throttle for a "Go Around" the tailhook caught an arresting wire, slaming his F6F HellCat into the deck. The aircraft broke in half with the pilot and forward half of the aircraft going into the ocean.

Ensign Jones was flying in good weather and had many hours of training in combat fighters and bombers. The particular aircraft was previously flown by Ensign Charles Hubenthal while supporting the Marine's attack on Okinawa, and again when the Japanese Battleship Yamato was heading to attack the island. Was Ensign Jones having mechanical difficulty with the aircraft? We will never know, but at the end of the day he was trying to land one of the most powerful and deadliest aircraft of its time on a small escort carrier deck in a war zone. Ensign Roy Edward Jones USNR was one of so many unsung heros that died to further the cause of freedom for all Americans and their allies. 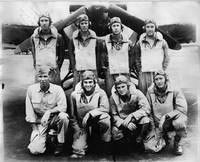 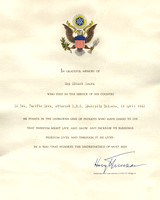 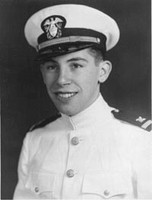 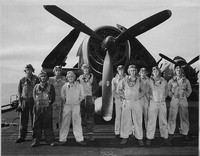 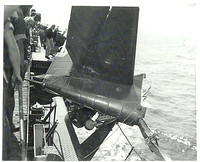 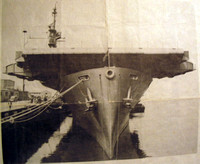 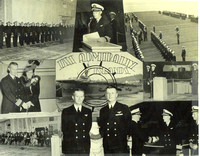 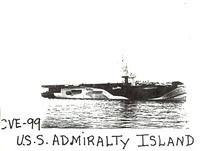 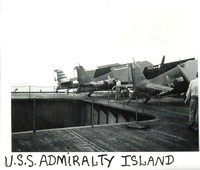 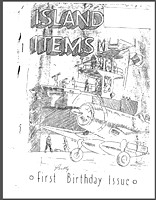 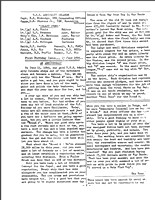 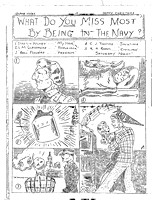 Categories & Keywords
Category:
Subcategory:
Subcategory Detail:
Keywords:Ensign, (Landing, (a, ., Admiralty, Americans, Battleship, Charles, Ensign, Ensign, Ensign Jones, Ensign Roy Edward Jones USNR, Essex, F6F, Flyable Dud, Go Around, He, HellCat, Hubenthal, Islands., Japanese, Jones, Jones, LSO, Marine's, Officer), Okinawa, Signals, The, The, USS, USS, WWII, Was, Wave Off, We, While, Yamato, a, a, a, a, a, again, aircraft, aircraft, aircraft, aircraft, aircraft), aircraft?, all, allies., an, and, and, and, and, and, and, and, applying, arresting, at, attack, attack, attempting, bombers., broke, but, by, carrier, caught, cause, combat, damaged, day, deadliest, deck, deck., died, died, difficulty, during, end, escort, fighters, flown, flying, for, for, forward, freedom, from, from, full, further, going, good, had, half, half, having, he, heading, heros, his, hours, in, in, in, in, into, into, island., its, know, land, land, late, many, many, mechanical, most, never, not, ocean., of, of, of, of, of, of, of, on, on, on, one, one, or, particular, pilot, powerful, previously, received, responding, signals, slaming, small, so, supporting, tailhook, that, the, the, the, the, the, the, the, the, the, the, the, the, the, the, the, the, their, throttle, time, to, to, to, to, to, training, trying, unsung, war, was, was, was, was, was, was, weather, well, when, while, while, will, wire, with, with, worn, zone.
Guestbook for Ensign Roy Edward Jones USNR
Keith Anderson Photography
Dale-Ann Gustavus Fox ~ I'd like to communicate more with you on this. What was your father's name and could you please send me a photo of him? These men would have been together for a while and been pretty close. I have a photo that includes DH Bock, DW Wilcox (I've talked to his son) IW Bonnot, GS Darby, NA Corbin, AA Messenger and MW Buckner. Also other photos of men that I don't know their names. Did your Father's have any photo of the ships/planes/men? I also have some ship's newsletters that are posted at: http://www.navsource.org/archives/03/099.htm that you may be interested in.
Dale-Ann Gustavus Fox(non-registered)
My Dad was, also, flying a "dud" on April 18, 1945 from the USS Essex to USS Admiralty Islands. I have his flight log which states "Ens. Jones killed while I circled carrier" in the remarks portion.
Unfortunately, my Dad died in 1976.
I remember snatches of his stories, which included Ens. Jones' accident. If I remember correctly, my Dad was explaining the perils of landing on a carrier, which was not only moving forward, but, also, up and down. Ens. Jones hook may have caught the landing wire, because the carrier was moving upward and his plane couldn't rise fast enough.

Even though my family has its share of heroes who died in service to their country, Ens. Jones is remembered by us, and will continue to be in future generations.
Keith Anderson Photography
If you or a relative were on the USS Admiralty Islands, I would love to hear from you.
The guestbook is empty.
Loading...
© Keith Anderson Photography
Powered by ZENFOLIO User Agreement
Cancel
Continue